Orpheus Brewing’s Stouts All the Way Down gains 16th release 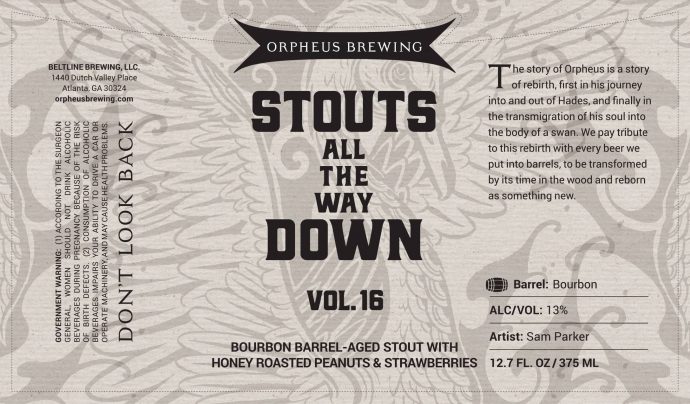 Orpheus Brewing Stouts All the Way Down Vol 16 debuts on September 3rd, a part of the brewery’s “Year 7” Anniversary.

This is the 16th iteration of the brewery’s ongoing Stouts All the Way Down Series started an imperial stout aged in Heaven Hill Bourbon barrels. Which as odd as it sounds now, was very unique upon release (around the brewery’s 5th anniversary. Why? No vanilla, lactose, cereal, or other food. Just a barrel-aged imperial stout -something we basically forgot about.

The series name draws from the mythological idea of a world turtle that supports a flat earth on its back. That turtle rests on a larger turtle, and that turtle on a… you get the idea. The stack of turtles continues indefinitely. It’s a popular example of the regress argument in epistemology. If you want to deep dive into a logical wormhole, read up on the term “infinite regress.”

This particular [Turtle] in the series is an imperial stout aged in bourbon barrels with honey roasted peanuts and strawberries.

Stouts All the Way Down Volume 16 will Bev available in 12.7oz bottles at the brewery starting September 3rd.